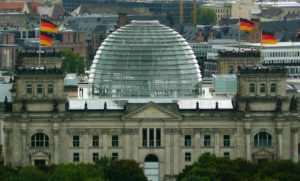 The Reichstag building is a historical edifice in Berlin, Germany, constructed to house the Imperial Diet (German: Reichstag), of the German Empire.

It was opened in 1894 and housed the Diet until 1933, when it was severely damaged after it was set on fire. After World War II, the building fell into disuse; the parliament of the German Democratic Republic (the Volkskammer) met in the Palast der Republik in East Berlin, while the parliament of the Federal Republic of Germany (the Bundestag) met in the Bundeshaus in Bonn.

The ruined building was made safe against the elements and partially refurbished in the 1960s, but no attempt at full restoration was made until after German reunification on 3 October 1990, when it underwent a reconstruction led by architect Norman Foster. After its completion in 1999, it once again became the meeting place of the German parliament: the modern Bundestag.

The term Reichstag, when used to connote a diet, dates back to the Holy Roman Empire. The building was built for the Diet of the German Empire, which was succeeded by the Reichstag of the Weimar Republic. The latter would become the Reichstag of Nazi Germany, which left the building (and ceased to act as a parliament) after the 1933 fire and never returned; the term Reichstag has not been used by German parliaments since World War II. In today’s usage, the German word Reichstag (Imperial Diet Building) refers mainly to the building, while Bundestag (Federal Diet) refers to the institution.

Registering to visit the dome of the Reichstag Building

The roof terrace and dome of the Reichstag Building can be visited by members of the public, and offer spectacular views of the parliamentary and government district and Berlin’s sights.
Admission is free; advance registration required. – online registration here

Guided tour of the Reichstag Building

We offer guided tours explaining the functions, working methods and composition of Parliament, as well as the history and architecture of the Reichstag Building. Afterwards you will have an opportunity to visit the dome. Guided tours of the Reichstag Building are held in weeks when Parliament is not sitting:
Daily at 9.00 hrs, 10.30 hrs, 12.00 hrs, 13.30 hrs, 15.30 hrs, 17.00 hrs,18.30 hrs, 20.00 hrs

Underground:
U Bundestag U55
S+U Brandenburger Tor U55