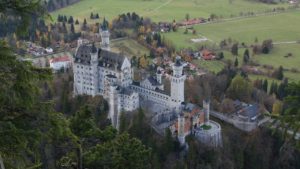 Seven weeks after the death of King Ludwig II in 1886, Neuschwanstein was opened to the public. The shy king had built the castle in order to withdraw from public life – now vast numbers of people came to view his private refuge.

Today Neuschwanstein is one of the most popular of all the palaces and castles in Europe. Every year 1.4 millionpeople visit “the castle of the fairy-tale king”. In the summer around 6,000 visitors a day stream through rooms that were intended for a single inhabitant.

The setting of Neuschwanstein could not be more idyllic. However, movement in the foundation area has to be continuously monitored, and the sheer rock walls must be repeatedly secured. The harsh climate also has a detrimental effect on the limestone façades, which will have to be renovated section by section over the next few years.

The municipality of Schwangau lies at an elevation of 800 m (2,620 ft) at the south west border of the German state of Bavaria. Its surroundings are characterized by the transition between the Alpine foothills in the south (toward the nearby Austrian border) and a hilly landscape in the north that appears flat by comparison.

Neuschwanstein is a global symbol of the era of Romanticism.

The palace served as a model for the Sleeping Beauty Castle of Disneyland and became a location for films such as Helmut Käutner’s Ludwig II (1955), Luchino Visconti’s Ludwig (1972) and Chitty Chitty Bang Bang (1968).
It is also visited by the character Grace Nakimura alongside Herrenchiemsee in the game The Beast Within: A Gabriel Knight Mystery(1996)

In 1977, Neuschwanstein Castle became the motif of a West German definitive stamp, and it appeared on a €2 commemorative coin for the German Bundesländer series in 2012.

In 2007, it was a finalist in the widely publicized on-line selection of the New Seven Wonders of the World.

In 2009, a plan was discussed to make it a transnational candidate jointly with Ludwig’s Linderhof and Herrenchiemsee palaces and two similar palaces in Romania: Peleş Castle and Pelişor Castle.

How to get there

Neuschwanstein Castle is situated near Schwangau and Füssen in the Allgäu. The path to the castle starts in the village of Hohenschwangau, and this is also your last opportunity to park.

By car or coach

On foot
It takes about 30-40 minutes to walk from the ticket centre to the castle (around 1.5 km on a steep uphill road).

With the shuttle bus

The buses operate all year round and shuttle between Schlosshotel Lisl and Neuschwanstein Castle according to demand, i.e. without a fixed timetable.

Tickets can be obtained on the bus.

Your entrance ticket is valid for a guided tour of the castle at a particular time. We would like to explicitly point out that the tours begin punctually. Please allow sufficient time to get up to the castle, as if you arrive too late you will no longer be able to participate in the tour.

Please note that during the high season entrance tickets for a particular day may be sold out. We would therefore ask you to reserve your tickets well in advance.

Tickets with a specific visiting time can be reserved for an additional prepaid charge two days before the desired castle visit (3 pm local time) at the latest.

The visiting time can only be changed or the ticket cancelled up to 2 hours before the start of the tour (also by phone).

Opening hours Tickets on sale at the Ticketcenter :

Königsticket (King’s ticket) for both Neuschwanstein Castle and Hohenschwangau Castle on the same day:

Neuschwanstein Castle has a lift which makes it possible for wheelchair users and persons with reduced mobility to take part in the tours of the castle.
Dimensions of the lift: door width 0.85 m, depth 1.30 m. Please make sure your wheelchair is not too big for it.