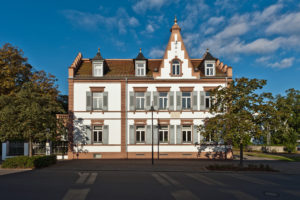 The first two-stroke engine in1879; the first car in1886; axle-pivot steering in 1893: The career of Carl Benz is marked by countless automotive milestones. The permanent exhibition at the lovingly restored Karl Benz House in Ladenburg gives you some idea of the extent of his creative power. Exhibits, documents, personal memorabilia and models from his working life reflect the passion of a man who to the very end remained true to his personal motto: “Inventing is much more agreeable than having already invented.” The genius of Carl Benz lives on in the conferences organized by the Daimler and Benz Foundation for scientists from all over the world. A partner of Daimler AG, the foundation is based here.

In the large park of his house, which is an original part of the property, Carl Benz had a garage built in the style of an old fortified tower. In 1921 a veranda with a flat roof was built on; a few years later the south side of the house got an extension across the entire gable wall.

In this house Carl Benz accepted the honours that were bestowed on him as automotive pioneer. Members of the Benz Family lived in this house until the year 1968. In 1969 it passed into the hands of the town of Ladenburg. It temporarily served as a restaurant and club house. In 1985 the house was acquired by Daimler-Benz and thoroughly refurbished.

The Benz House serves today as an exhibition documenting the lifework of Carl Benz, which is marked by numerous automotive milestones. Exhibits, documents, personal memorabilia and models from his working life reflect the passion of a man who to the very end remained true to his personal motto: “Inventing is much more agreeable than having already invented.”

The Karl-Benz house is also the registered office of the Daimler and Benz Foundation. The foundation was created in 1986 by Daimler-Benz AG (present Daimler AG). It contributes to the future development of society through the provision of scientific findings. In doing so it views itself as promoter of the knowledge society and strives to enhance the reputation of research in public opinion.